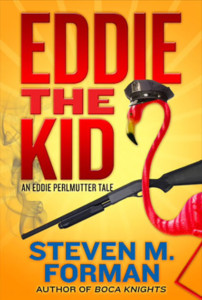 Steven M. Forman is the author of two well-received Eddie Perlmutter novels, BOCA KNIGHTS and BOCA MOURNINGS. Much like Perlmutter, Forman is a Boston native and now spends much of his time in Boca Raton, Fl. Unlike Perlmutter, Forman is a semi-retired businessman who remains involved in his business and not a decorated ex cop. EDDIE THE KID is Forman’s first e-Book and novella. His writing uses the Florida landscape like Carl Hiaasen at his best and has the open humor equal to that of Dave Barry. Forman’s writing can be as serious and thrilling as any thriller out there, and his use of humor—both dark and light—makes him stand-alone in his field.

I recently had an opportunity to interview him for TheBigThrill.org:

With two successful novels that deal with the present time why do a novella that’s a prequel to your series?

My Boca series starts when Eddie Perlmutter is a fifty nine year old retired super cop. He’s sixty one by the end of the trilogy. If I kept moving forward I’d eventually have a ninety-eight year-old protagonist. I decided to take a step back in time and tell old and new readers how he got started. I also wanted to show a darker side to Eddie.

When you first conceived the idea of Eddie, did you know his back story?

As a Boston Irishman myself, I think you have captured the old bigotry, humor and pride of the Boston Irish in all your writing; you’ve also portrayed the North End Italians well, from Mafia hit men to small businessmen. How have you been able to do this?

I grew up in the area and had plenty of experience with both the Boston Irish and North End Italians. I took the best and worst of those I met and rolled them all together to create an eclectic cast of characters. I also have an Italian brother in law who grew up in the North End and provided me with an accurate picture of what it was like. I knew a few people in organized crime but I learned more from reading the papers and watching The Godfather a hundred times.

When you have an idea that brings Eddie back to the written page, how much, if any, research do you do?

I do a lot of research and my plots usually dictate the kind of research I have to do. In Eddie the Kid I have a killer who comes to America from Sicily on a vendetta. I had to learn about Sicily and create a vendetta that started in the days of The Black Hand extortionists, prohibition, the Chicago mob of 1910, Mafia bosses Al Capone and Johnny Torrio, Mussolini and World War Two. I did a sub plot on forced busing in South Boston. Everything had to researched and one research project led to another.

EDDIE THE KID shows readers Eddie’s past in Boston, which is the first time you’ve left Florida in your writing, do you see Eddie having adventures outside the state as a grown man?

Eddie is 29 years old in EDDIE THE KID. He’s 59 when he retires to Boca. That leaves me thirty years of adventures in any locale I want to take him.

I have to ask because it happens in all your stories—repeatedly—how did you fall upon Eddie and his talking penis? Ghosts and demons I’ve read in thrillers, but I think Eddie has the only talking penis in fiction.

He may have the only talking penis in fiction but in real life every man has one. Seriously.

Did you find writing a novella easier than a 300-page novel?

I found it difficult to develop plot and characters in a hundred pages or less. I like to write stories within stories that tie together in the end. That’s tough to do in a shorter format.

If EDDIE THE KID is a successful eBook, do you see more novellas in the future?

Sure. I write to entertain readers and if there is a demand for my short novels I’ll do more of them.

In the novella you write so well about Boston, is there a chance of a standalone Boston novel?

Absolutely. It’s a very interesting city with limitless characters and stories. One of my favorite authors is Dennis Lehanne and he’s all about Boston.

I’m outlining a story now about three families who escape genocide in their countries and flee to America to start over. Eddie might make a cameo appearance in the story but it’s definitely different than anything I’ve written in the past. Right now it’s just an idea but my sense of humor might not allow me to write a serious book. We’ll see what happens.

Boca Mournings is a riotous, ribald look into the wacky world of South Florida.  Not since Carl Hiaasen at his peak has anyone captured the pothole-marred, driving impaired, and geriatric-dominated zaniness as well as the new master of the comic crime novel Steve Forman.  Forman's wit is as sharp as his prose and Eddie Perlmutter is the best hero of his kind since Donald Westlake's famed Dortmunder.  Side-splitting fun with a crackerjack plot added for good measure.

If you love mysteries, this book is for you as it was terrific! Not only could I NOT put it down, but I’m going to obtain his other book in this series (and check out any OTHER books he may have written to boot!). Very straightforward in his approach, but it’s the results which are spectacular. Mr. Forman deals with serious, real-life issues in a practical manner. He makes the reader aware of the dangers in medicine and how lax some loopholes are which contribute to hurt people instead of heal. Aside from the issues, it’s really about who committed the crimes and how they get their just desserts. I also enjoyed how little I needed to know about the previous book in this series to understand the characters, previous actions, and how the first book impacts the second book. If you need a light reading companion on your trip, or you need something serious with funny moments, or you love mysteries, then this book is for you.

As for what I saw as barriers, if you’re not aware of the cultural barriers in Florida and how they were established, you may have some problems understanding how things fit in this crime book. If you’re not aware of the impact the freeway system had on citizens living in its way, take a look at Route 66’s history from completion to when the freeway system took over. You will see some communities and roads disappear with the advent of the freeway. Either way, bon voyage, enjoy your trip in Florida with Boca Daze!

Retired Boston cop Eddie Perlmutter returns in Steven Forman's Boca Daze.  Since moving to Boca Raton, Florida, Eddie’s busted Russian counterfeiters, solved at least two murders, thwarted neo-Nazi harassment, and gained justice for a number of those who couldn’t do it for themselves. This “Boca Knight” knows no fear—except perhaps when he’s facing the intimate challenge of sex as a sexagenarian. But Eddie may have met his match when he tries to shut down a string of illegal pill mills and finds himself a financial scammer as big as Bernie Madoff.

Armed with his unfailing wit, his Boston-bred fighting skills, and his courage in the face of danger that would make any sensible retiree head for the comfort of his condo, Eddie’s walking on gimpy knees straight into the most dangerous game of his never-dull life.

Ever wonder what would happen if you crossed Philip Roth with Elmore Leonard? This impressive crime debut may provide a hint. Long on back story, the saga of cop Eddie Perlmutter begins in a nineteenth century shtetl in Russia, where Eddie’s grandfather and the other villagers are prey to Cossaks and marauding bears. After demonstrating END_OF_DOCUMENT_TOKEN_TO_BE_REPLACED

With his first-ever book, author Steve Forman has created a “monster.” I mean that in a very positive sense: In Eddie Perlmutter --- a pugnacious, highly decorated ex-cop from Boston who “retires” to Boca Raton to avoid the bitter cold winters that cripple the arthritic knees broken by run-ins with Boston’s criminal element --- Forman END_OF_DOCUMENT_TOKEN_TO_BE_REPLACED

If in a gated or country club community anywhere in the state of Florida or if you grew up  in Boston, you owe it to yourself to read Boca Knights, a debut novel by Boca resident Steven M. Forman. It’s true he has focused his authorial magnifying glass on Boca Raton and his description of END_OF_DOCUMENT_TOKEN_TO_BE_REPLACED